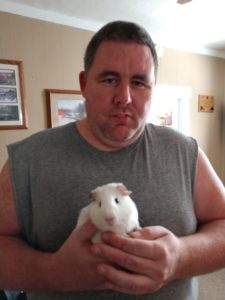 He may not be Dr. Doolittle, but Jimmy Cooper does have a way of ‘speaking’ with the animals. Recently he’s become his community’s ‘cat whisperer.’ Jimmy is part of Choices’ Semi-Independent Living program and lives in a house in Brookville. He does odd jobs around town to earn money and enjoys helping his neighbors with cutting grass, yard work, painting and other jobs. When not helping out around the neighborhood, he loves to go fishing. He also loves animals …. dogs ….birds …. he has a real passion for animals.

When one neighbor suddenly left a nearby house, a guinea pig was found inside, abandoned and clinging to life. Despite its poor condition, Jimmy took in the abandoned animal and adopted him as his own. He gave the guinea pig a new name, Butters. Butters is now healthy, well-fed and pampered, with his best friend Jimmy by his side.

When another older neighbor recently died, five feral cats she had been feeding and cared for now faced being abandoned just like Butters. That’s when our ‘cat whisperer’ Jimmy stepped in.

Jimmy took on the role of caregiver for the five strays, continuing to feed them just as his neighbor had.  He went one step further. He went around his neighborhood telling the story of the five cats until he had found a new forever home for four of them. He has one left he is still trying to find a home. He has named the cat Sy and plans to continue to care for him until one very caring ‘cat whisperer’ finds him just the right home.